In just over a month’s time we’ll get the chance to drink Kent Green Hop Beer again.

Apologies to all those of you patiently waiting for information on this year’s Fortnight. It IS happening and it starts on Friday 23rd September with our beer tent at the Canterbury Food & Drink Festival.

The season finale, so to speak, falls beyond the official Fortnight but we’re always grateful for the support and enthusiasm of West Kent CAMRA who make a big feature of Kent Green Hop Beer at the Spa Valley Railway  Real Ale & Cider Festival (and Autumn Diesel Gala), which this year runs Friday 21st – Sunday 23rd October 2016. 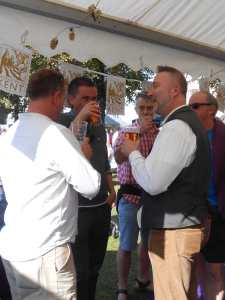 We’re working on the beer list right now and brewers are poised to start making this freshest of brews and the ultimate seasonal beer.

Over the next five weeks, in the run up to the start of the Fortnight, we’ll be posting news and features to whet your appetite.

So stay tuned, tell your friends and please follow us on Twitter (RTs, @mentions and use of the hashtag #KGHB much appreciated) so you don’t miss any Kent Green Hop Beer Fortnight 2016 news.